Play’n Go’s Firefly Frenzy is a gorgeous video game, and it debuted on July 24th, 2019, at all of the casinos where it is now available. The overall atmosphere is trippy, the visuals are fabulous, and the reels are situated at the beginning of an enchanted woodland lit by the moon. The icons have the appearance of being able to glow in the dark, and you will have the opportunity to profit from three distinct types of Wild firefly symbols as you go through the game.

You may place bets of up to $90 per spin on desktop/laptop computers, mobile devices, and tablets, and the game is played across five reels, four rows, and 30 different chances to win. There is no set pattern for when the firefly Wilds will appear on the reels; nevertheless, two will always come with a multiplier of 2x or 3x. When more than one of these multiplier Wilds contributes to a win, the multipliers will multiply themselves up to 243 times their original value.

Even though the concept, visuals, and music try hard to create a mystifyingly calm environment, this game may be dangerous. The extra feature might be difficult to activate, but the payoff of 10,000 times your original wager is enticing. A 5×4 reel set may be found amid a fantastical environment full of blooming flowers and airy wisps. The screen is filled with a glowing and shimmering array of colors, including purple, pink, blue, and yellow.

The music’s soothing and meditative vibe helps put the listener to sleep. There’s no denying that the online slot machine with the fairytale theme has a beautiful vibe, but can it yield miraculous wins? 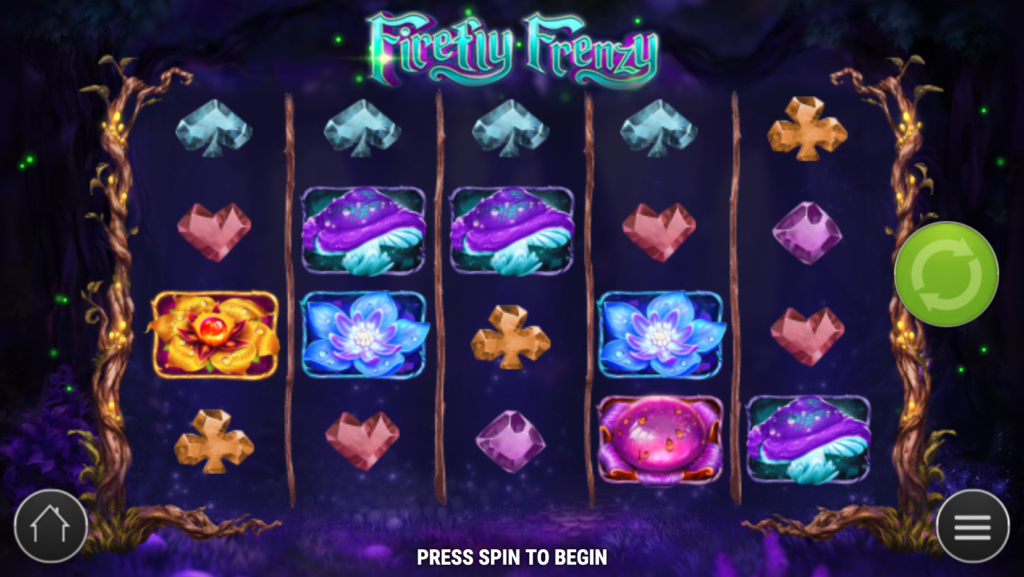 The Firefly Wild is the focal point of the action in this fairy tale’s narrative. It can occur as a regular Wild (the green Firefly), a 2x multiplier Wild (the yellow Firefly), or a 3x multiplier Wild (the red Firefly), and it can land on any reel. The Scatter symbol is the only symbol it cannot replace (pink Firefly). If you get more than one of these on a payline, they will combine to give you the most significant multiplier possible, which is 243 times your bet (3x3x3x3x3). This implies that you can land on a line hit up to 7290 times the amount you wagered in the base game alone.

It turns out that the Free Spins feature, called Frenzy Spins, gives you more of the same as the base game. Watch out for the Scattered moonlight. The extra part has the potential to activate if one (1) appears in view anywhere on the reels. If one of the fireflies decides to take a break on the moon Scatter, it will cause an entire swarm of fireflies to emerge and activate the function. The value of the lowest multiplier during the free spins will be the same as that of the Firefly that initiated it, starting with the eighth free spin in the round.

In simple terms, this implies that the multiplier Wilds would be either 2x or 3x in value if the feature were activated by a firefly Wild that awarded a 2x multiplier. The feature can also be re-triggered in the same manner, in which the Firefly that re-triggered the feature will now take the place of the previous Firefly and become the lowest multiplier that can land.

Firefly Frenzy is an adorable game; it takes place in a mysterious universe and has four symbols made of glittering crystals (representing clubs, diamonds, hearts, and spades). You’ll also come across four characters depicting a strange flora, with the golden one being the most lucrative of the bunch, offering multipliers of 3, 15, or 30 times your bet for combinations of 3, 4, or 5.

The green and yellow Firefly acts as the game’s Wild and may substitute for any symbol other than the moon Scatter. It also can appear anywhere on the reels and pays out as the game’s most valued icon. They can occur as a regular Wild, a 2x multiplier Wild (colored orange/yellow), or a 3x multiplier Wild (pink). If you acquire more than one multiplier Wild, the values of those Wilds are multiplied together, giving you the possibility of a multiplier 243 times larger than before.

There is also a symbol of the moon, which serves as the Scatter. However, each spin can only produce a single instance of this symbol. You will have access to the Frenzy Spins bonus round when it emerges since a Firefly Wild will land on it when it does. After receiving eight free games, the value of the multiplier Wild will be determined by the value of the lowest multiplier that appears during the bonus round.

Your chances of winning a massive reward are significantly improved during these free spins. Finally, there is a chance that the bonus round might be re-triggered, giving you 16 free spins.

It may have an enigmatic and calming appearance, but Firefly Frenzy is a tremendously risky slot game. This game is about the Firefly Wild symbols, which may occur on numerous reels to provide vast multipliers of up to 243x. One of our favorite aspects of the game is that the Frenzy Spins feature may guarantee that Firefly Wilds will be of a set value. The key to earning a significant amount of money is to trigger the feature with multiplier Wilds that are either 2x or 3x.

The mechanism through which the free spins bonus round is activated in this game is one of a kind. There is only one block on the reels for a single instance of the realistic-looking full moon Scatter symbol during each spin of the reels. In this game, you will activate the free spins bonus round when a “Firefly Wild” symbol lands on the full moon Scatter symbol.

“What is the maximum amount one may win?”

Even though this game does not have a progressive or a set jackpot, there is still the potential to win significantly. Because the maximum prize is 10,000 times your wager, this indicates that you have the potential to win up to $900,000 in a single round. This is a pretty strong potential, especially for a slot machine with a high degree of volatility, but to win that much, you will need to play with the highest available bet level.

Here are the winning combos to keep in mind. Fireflies represent the most significant emblem in this game. They are responsible for the following essential tasks:

On each spin, there is a chance that one or more fireflies may appear on the reels. In addition, they may incorporate multipliers, the sum of which may be as high as 243 times. Sounds great, huh?

If you get five Wilds on an active payline, you will win 30 times your entire stake. And then there are specific multipliers added on top of that, of course. The unusual and lovely flowers are worth a significant amount of money, ranging from five to thirty times the total amount wagered on the round. If you witness a 5-of-a-kind, the payout for the card symbols hearts, spades, diamonds, and clubs ranges from 1.5 times to 3 times the original wager.

Play n Go’s Firefly Frenzy has a return to player percentage of 96.59%, referred to as the RTP. It is a slot machine with very high volatility, which means that players who spin the reels on this game have the opportunity to win some of the most generous rewards possible.

To win a prize, you must line up at least three symbols of the same kind along a single payline. If you are fortunate enough to hit five firefly Wilds on an active payline, you will be awarded 243 times your original wager. This makes the Firefly Wild the most lucrative symbol in the game. Nevertheless, two additional multiplier Wilds in the game can increase your maximum payout to a staggering 7,290 times your reward.

Firefly Frenzy demo versions of the slot machine game are available in almost every respected casino. Because you are given several free play credits that you can use in any way you wish. Actually, this presents the ideal opportunity for you to become familiar with the mechanics of this slot machine before you give it a spin for the chance to win actual cash rewards.

The Firefly Frenzy online slot machine has 30 paylines, and players can wag anywhere from 0.30 coins to 90 coins on each spin. Both big rollers and casual gamers will find this betting range pretty comfortable, enabling both types of players to develop a betting strategy that works to their advantage.

An “Autoplay” mode may be used for up to one hundred spins. In addition, players can activate the turbo mode by clicking the lightning bolt icon in the display’s lower left-hand corner.

Play’n Go has created an online slot game called Firefly Frenzy that has been customized for mobile play and appears just as captivating on a mobile device as on a desktop computer. The game can be played on any device without glitches, providing players with an enjoyable gaming experience without requiring them to download any software.

You may increase your chances of winning big with Firefly Frenzy by following these hints and tips by pro gamblers: