We like how little has altered from the game’s initial aesthetic. There’s still plenty of delectable fruit on the reels, as well as a brilliant rainbow colour palette and a fun disco atmosphere. Everything we liked about the previous game’s design is still present.

It’s usually a good idea to keep a sequel’s appearance and feel consistent with its predecessor. Money Train 2 and Pink Elephants 2 are examples of outstanding games that quickly attracted players since they not only added additional action but also maintained a similar look.

Jammin Jars 2 has an RTP of 96.4%. This is little less than the original Jammin’ Jars payout ratio of 96.83%, but it is still a good return for players.

It’s also a very unpredictable online slot with a hefty top reward. When you play Jammin’ Jars 2 slots for free or real money, you can win up to 50,000x.

The majority of the additional features from the original Jammin’ Jars will be available to players. However, there are a few new elements that are guaranteed to wow you.

The previous game’s wild jar multiplier reappears. It starts at x1 and grows in value as it is part of a combination.

This is the scatter sign as well. So three of them will activate the Jammin’ Jars 2 free spins round. 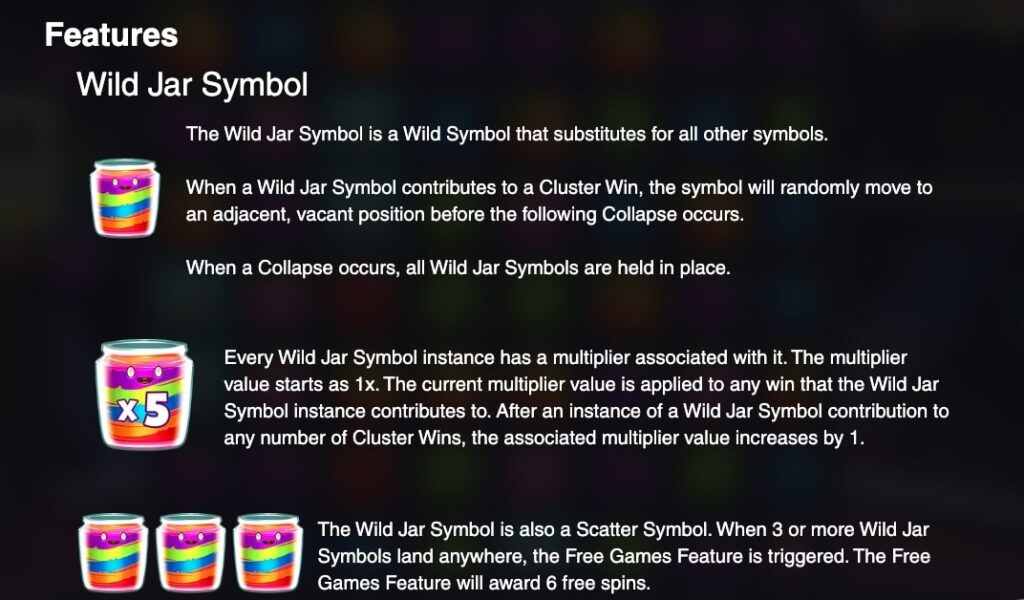 The Giga Jar is a feature that may be unlocked by collecting gold vinyl symbols during the main game. When you’ve accumulated enough, the Giga Jar will be activated.

He’s a cool-looking man wearing sunglasses who will stomp down into the reels as a massive wild symbol (either 2×2, 3×3 or 4×4).

It’s an intriguing addition to the main game, as it’s quite similar to the Gargatoon in Reactoonz.

The Fruit Blast function is activated at random. A giant fruit sign or symbols are added to the reels and pay out cash prizes based on the winning combinations they form.

You will receive 6 free spins if you activate the bonus round with 3 scatters. During this bonus, you can collect Gold Vinyl symbols to fill your bonus meter and leave behind wilds.